Sunny start to the Season 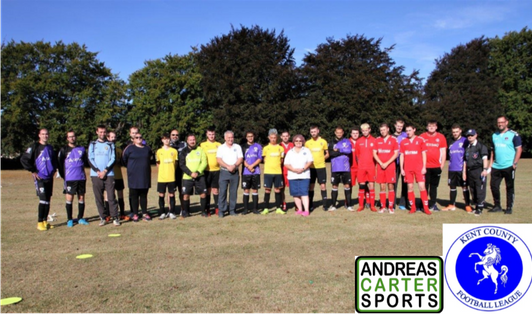 The 2019/20 season got of to a bright start on Sunday 15th September at The Abbey School in Faversham where 35 teams took to the pitches in 3 hrs of football over 6 pitches. We welcomed Gavin and Julie Hoare, Chairman of the Andreas Carter Kent County League and his Wife who are the sponsors of the Premier league this season for a photo with some of the teams and to watch some of the football.

Teams from clubs Maidstone United FC Raiders, Charlton Athletic AC FC, Bromley Green Valiants, Faversham Town Youth FC, Canterbury City FC, Milton and Fulston, and Swanscombe Tigers Fc fielded players with varying disabilities in divisions that are ability based. These first round of games are used as a grading event to make sure we have the correct teams in the correct divisions for the reaminder of the season.

The games all kicked of at 10am and finished at 1pm with a total of 90 games being played over the 6 pitches.. Gavin Hoare said “ its amazing seeing all these players being able to play football in this environment. They are all very friendly and even though we where he for the first time today we were welcomed by all. The committee are dong a wonderful job in providing football in this way.”